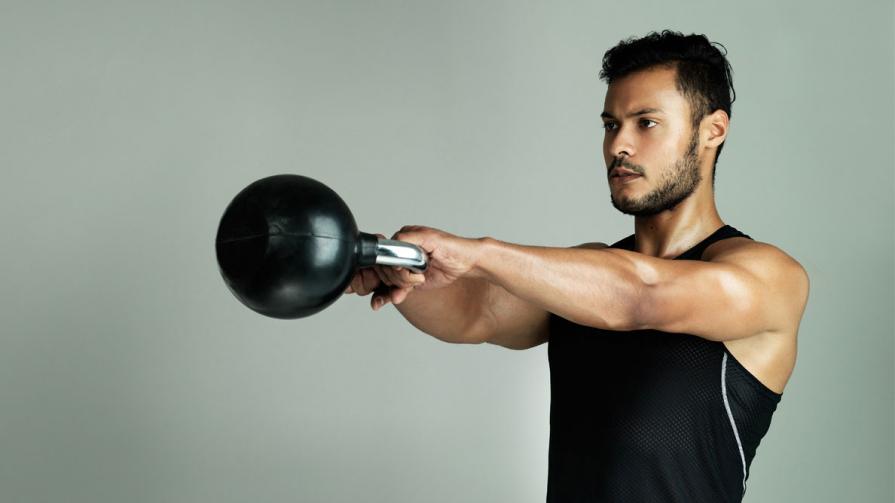 One of the biggest problems that still exists in today’s fitness training world is trying to convince people of the necessity to think of the body as more than just an assembled collection of parts.

Thanks to the bodybuilding craze of the late ’70s and early ’80s and guys like Arnold, Ferrigno and even the later hulks such as Haney, Priest and Yates, gym culture is still caught up in the concept that if you train the body in isolation the whole will get stronger.

In my experience there are definitely times to use isolation exercises – heresy, I know from an RKC, but it’s the truth. For instance, many women in our community will struggle with pull ups. One of the biggest problems is a lack of strength in elbow flexion. For those who don’t know this is the movement caused by doing bicep curls. Now, I’m not suggesting that we need to devote whole days to “Arms” but in certain cases adding in some exercises in training to improve strength in that area will be beneficial. Likewise for guys struggling to finish off their press. For many, at the point the bell clears the head there is a distinct feeling of needing to change gears. What is happening is that emphasis goes from the bicep and shoulder to the triceps. Under max loads the body may not always happily make that leap to the next gear. But adding in some overhead tricep extensions will help. In fact, training logs of top GS competitors will show that during the off season they spend a large amount of time on assistance exercises while boosting General Strength and Conditioning. Their focus during this time is to boost overall strength and iron out any kinks in their movement – and tricep extensions fit this mold.

In Kenneth Jay’s book Perfecting the Press there are a myriad of ways to increase your press solely via pressing. While very clever they are also, in many cases, needlessly complex and time consuming to set up. And didn’t we all start using kettlebells in the first place because they were simple? So why are we trying to make things more complex than they need to be? In a lot of cases a simple solution will work best and if you look at top strength training groups such as Westside Barbell they have a host of assistance exercises to boost shortfalls in the three main lifts. The development of GPP – of being all round strong – is chief among them though and will take you a lot further in your training than seeking out a fancy way of doing things.

This return to simple, to smart programming is why the FMS system makes so much sense to me. The tests themselves are for the most part building blocks of exercise. For instance there are tests to determine internal and external rotation of the shoulder while also testing thoracic rotation and extension. These skills are important for throwers, fighters, swimmers, kayakers and anyone who has to ever rotate and move their arms. Likewise the Active Straight Leg Raise test while looking like a simple hamstring flexibility test is also a test for how active the hip flexors are and also has important links to squat depth. The idea is that, like with a pyramid, a bigger, stronger base of movement skill can lead to a high eventual peak of sport skill.

These building blocks are so foundational that improving them can lead to instant gains in movements that look completely unrelated. There is an excellent new book out called Becoming Bulletproof by Tim Anderson and Mike McNiff. They’ve spent a lot of time looking at the foundational, so called primitive patterns, within the FMS and integrated them into training sessions. In particular their use of rolling and crawling has reminded me of several things –

We have lost our way as beings. Like it or not we are all still not far out of the trees and our monkey cousins don’t seem to experience all the movement and injury issues we seem to. (Of course, not being able to speak with monkeys, even hand signals with that Coco, I am just guessing at this). I’ve never seen a Chimp complaining to another Chimp that it has plantar fasciitis due to not warming up running away from a Jaguar. As humans we start to learn the skill of movement early in life as we begin exploring. We start with crawling and eventually stand. Sadly, as soon as we start getting the hang of this we are then sent off to school to start “learning”. Sadly the book learning is spent sitting down and we then spend the rest of our lives forgetting everything we learned in the first six!

The drills within Becoming Bulletproof focus on things that we all should spend time doing and the more I look the more I see them everywhere – crawling and rolling can be found in the Get Up and swimming, both of which I have heavily advocated. The Get Up is a no brainer. When great minds like Steve Maxwell (who originally brought it into the RKC system), Pavel Tsatsouline, Gray Cook, Brett Jones, Dave Whitley, Jeff O’Connor, et al all heavily praise the Get Up you’d have to figure that it’s probably a good idea to incorporate it into your own training. But swimming…Wait…that’s not very RKC of me – to advocate both something that is thought of as “cardio” AND non-load bearing.

But think about it – the freestyle stroke IS crawling in water. It IS the climbing pattern that Gray so heavily advocates. It IS the Monkey Bars that Dan John enthuses about. It is all of those things. It is easy on the joints and good for flexibility. It is good for the heart and lungs. And, of course, it is an essential athletic movement that may just save your life some day.

But what about other movements within the RKC system? Where are our breakdowns, or patterning progressions? Well, if you’re a good reader by now you’ve taken me up on my urging to buy Dynami. I’ve written fairly extensively about it over the last month or so and honestly believe that everyone should own a copy. If you’re still sitting on the fence about it consider that within are workouts that show you the building blocks of movements – exercises such as Wall Touches, Single Leg Deadlifts, etc. – are all in there and all in a format that you can use instantly.

Because that’s the funny thing – we’ll all go and spend time doing our FMS correctives to fix building blocks of movement, but we won’t pattern to build the blocks of exercise skill. The exercises themselves, while able to be improved via the addition of foundational movement skills, are also able to improved via the use of breakdown drills that will highlight and improve various aspects of each exercise. My work on simple progressions for the Swing has seen me quickly improve my Snatch numbers with the 32kg – up to 140 reps in two weeks! And I’ve even been Snatching the 36kg for a few reps too. Only a few months ago that all seemed out of reach. I thought those bells were for guys like Dave Whitley – big, massively strong guys. Well, spending some time lining it all up right has shown me that yet again I should raise my expectations of my own training. I don’t actually believe there is an upper limit for how much strength is possible. The gains I have made in the last few moths have been miles beyond anything I had thought I was capable of – from essentially fixing my hamstring issues, to improving my shoulder mobility and thoracic rotation, to increasing performance elements like my hip drive to allow me to snatch bigger weights.

All made possible by simplifying my training, working on the building blocks to recreate my functional pyramid bigger and better than ever.